Terrorists use violence in an attempt to achieve political goals. Their intent is to bring about political change by creating a climate of fear within the society they oppose. The targeting of innocent victims and symbolic locations for a high-profile attack has long been the preferred method of terrorist organizations. As defined by Kids Encyclopedia – Kids Britannica 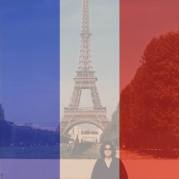 This morning our girls asked why my husband and I were looking at a photo album.  The album filled with photos from our honeymoon in the Fall of 1999 and pictures of our stay in Paris.  We shared with them the news of events in Paris yesterday, and the acts of terrorism.  Also sharing we were looking to find our pictures to share in solidarity with the people of France.

It was just this past September that we were open in sharing to our now 9 and 7-year-old daughters the history of September 11, 2001.  Up until now it has been a day that we have given thanks to first responders, the people who enter into a situation whether they are fire fighters or police as its their job. We shared more about the history of that day in terms of why we were so thankful for the first responders on that day and what they did that makes us so thankful to the jobs they do each and every day.  It was the first time our girls heard us discuss terrorism in 20th century terms. Both girls know both my husband and I grew up on the East Coast near to New York City.  Like the explanation I shared above from the kids encyclopedia, we shared the history of the day in terms not to scare them, but to have them understand what has happened and if at school they were to hear anything in remembrance of the day it would have been from us they heard it first.

Today we shared again what we know in terminology they would understand from the news, where these attacks took place and that there were lives lost. Again we referred to the kids encyclopedia definition to give them a way to define what happened yesterday in Paris.

We do not share this with our girls to create fear or anxiety.  At their current ages we believe they should have an idea of current events even those that are sad and upsetting. We want them to hear it from us and allow a discussion before they may hear it from others.

Our discussion was thoughtful and through their questions brought about the discussion of 9/11 again.  I believe we are giving them the foundation to understand what can happen in our world today.

Locally we pass on the freeway a hillside in Lafayette filled with crosses that is updated with the number of deaths from our armed forces from the Iraq/Afghan war.  This is something we discuss as we drive past now and again.

So it was this morning that we woke up to a new day in our world that was changed yesterday by the acts of terrorism in France.  It is with solemn hearts we stand with the people of France together as a family.

There are billions of perspectives, but this is mine...

Life After Wheat
Riddle from the Middle

real life with a side of snark

Life with This One

My Recipe for Happiness

All Things Work Together

A journal of life after loss

Exposing the red thread myth in relation to adoption

WHAT'S A WORD, IF IT ISN'T HEARD

Motherhood (and all the rest)

Dumptrucks, dishes and dirty work - chronicling life with the littles

Keeping the Glass Half Full

Just a working mom trying to get it all done

The adopted ones blog

Two adoptees - one vocal the other not so much...